Illinois the 21st state to become part of the United States is the 5th most populated state in the country with a total of 102 counties. Its state motto: ‘State Sovereignty, National Union” has proven through the years and has come to show Illinois is a joining point for the east, west, south, north and mid parts of the country. Commonly mistaken for the capital, Chicago is the biggest and most populated city in the state and has a metropolitan area that spreads to parts of Wisconsin and Indiana. Located in Northern Illinois also known as Chicagoland, Chicago is also the main passage to connect major water bodies in the state as it connects with the Great Lakes, the Mississippi River and Atlantic Ocean. The actual capital Springfield, located in Central Illinois better known as the Heart of Illinois, is the third largest metropolitan area. The third main division of the state, Southern Illinois is the states least populated area, one of its main points it the shared metropolitan area with St Louis, MO, known as East St Louis and called Metro-East.

Illinois has proven to be a fast growing agricultural and industrial state with great natural resources such as coal, timber and petroleum. The state has become a powerful economic and cultural base internally as well as for the country. In 1865, Illinois was the first state to consent the abolishment of slavery as stated in the 13th amendment. This gave the first great step that ended this period and moved the enforcement for equal rights for all. One of the World’s most popular fast food chains McDonald’s first started in Des Plaines. Chicago was the home of the first skyscraper to be built in the world in 1885 and after the 9/11 tragedy at WTC, Sears Tower in Chicago became the country’s tallest building. Chicago’s Mercantile Exchange building was built with no inner steel skeleton and as most skyscrapers, it depends only on its thick walls to stay up.

The state of Illinois is popular for having the highest amount of personalized car tags than any other state in the country. In 1874, the Lincoln Park Zoo bought a bear cub, its first animal for $10 on June 1, 1874. Illinois is also home to world’s largest library with a collection of over 2 million books. For St Patrick’s Day, the Chicago River is dyed green to commemorate the festivities. Nabisco the world’s largest cookie factory is located in Chicago and in 1995 it reported a 16 billion Oreo cookies production. Illinois is also one of the biggest transportation equipment manufacturers. This last production has created a high demand for vehicle transport in the state; whether it’s a car, a bike or a boat, Illinois has great movement for the industry. 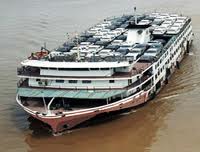 Because Illinois joins major water bodies, it has become a central point to transport boats all over the country, overseas and worldwide. The state operates the Illinois International Port district which is formed by several major port facilities within Chicago, such as the Port of Chicago and Calumet Harbor. This last one is managed by the US Army and is the main element of the District. Through the port vessels reach the Atlantic Ocean thanks to Lake Michigan through the Saint Lawrence Seaway. The Mississippi River and the Illinois River are also major transport routes for boats as well as for carriers to be able to transport boats off water and through the mainland.

University of Illinois Urbana-Champaign is located in Urbana and Champaign, part of Central Illinois is one of the biggest universities campus wise in the state. It houses about 45,000 students year long and is constantly getting new registrations. It is also ranked in the top 12 universities of the states. University of Chicago is also a renowned education center that attracts thousands of students from all over the world every year. This is also one of the main reasons why car transport is in great demand, as students look to relocate when the semester starts and also once their college experience is over.

Transporting cars during this time can be a big hassle as students are going through major transitions in their lives, whether they are starting college and leaving home or finishing college and returning. Therefore car transport has provided many possibilities to provide peace of mind also offering student discounts to help with their budgets.

Illinois although it ranks in place 34 for senior state population, is still amongst the highest percentages for 12.1. Because Illinois lacks the noise, busy cities, and many major points in the state, seniors have found it very comfortable to relocate in Illinois for the spring and summer periods. Illinois is comprised of many small towns and mid-sized cities that still offer the comfort and peace of mind of the old days.

However, most seniors are known to be snowbirds when it comes to winter season as most of them flee south to warmer areas to wait out the heavy snows and below zero temperatures. This massive reallocation done every 6 months approximately brings a lot of car transport movement into the state.

Although Illinois brings a lot of movement for car transport industry as well as for boats, a major disadvantage it has besides being hit by major weather storms during the winter, is that all its main business is located in Chicago. Any other point far from Chicago is considered an off route location and transportation costs can be much higher in order to have a car transported.

Thank you for reading Car Transport in Illinois please read also How to ship a boat and Car transport during snowbird season.